Born in Metz (France), in 1817 Anne Eugenie Milleret received from her mother a sense of courage, of freedom and service. The activities of her father, a member of Parliament and banker, helped her to appreciate the important social and political issues of the day. Her family was not religious, but her First Communion on Christmas Day 1829 affected her deeply: she was seized by the immensity of God with " a bond of love". 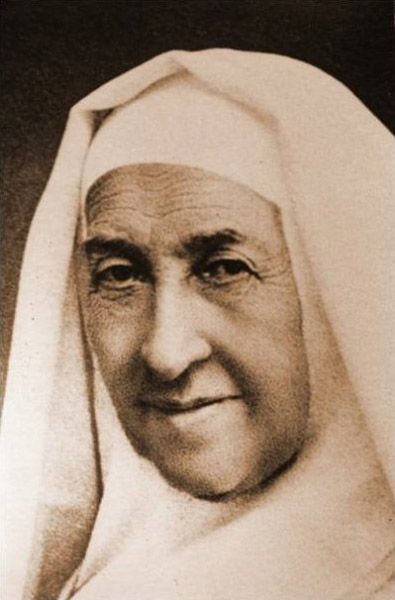 As a young girl, she suffered the ruin of her father, the separation of her parents and the death of her mother in a cholera epidemic. Deprived of support she wonders what the meaning of her life is, what project could make her happy? The superficial and mundane life she is living is not enough, nor is   a too pious Christian life, which does not change convictions into action.

In 1836, she attended the Lenten conferences of Father Lacordaire, a Dominican. Overwhelmed by his words, she will write to him:

"Your words answered all my thoughts..., it completed my understanding of things..., it gave me a new generosity to pass on, a faith that nothing could change..., by then, I was completely converted”

Her path crossed with Father Combalot, who spoke to her about the idea of founding a Congregation at the service of the education of young girls with a view to social transformation enlightened by the values of the Gospel. The project was born on April 30, 1839.

This young woman, now Sister Marie Eugénie, became a tireless foundress. Her trust in God, her great freedom in relationships and her visionary talent, always centred on Christ, will give her the courage and humility to overcome with audacity the joys and struggles of her 59 years of religious life.

Strong friendships with Sister Thérèse Emmanuel, co-founder of the Congregation, also with Father d'Alzon who founded the Assumption Augustinians in 1845, and the help of many others, broadened her perspective.

Towards the end of her life, and the loss of her physical capacity, Marie Eugenie liked to say: "Now all I have to do is be good. "By the time she died in 1898, the Congregation had already increased considerably.

She is recognized as a saint by the Church, was beatified in 1975 and canonized in 2007.

EUCHARISTIC CONCELEBRATION FOR THE CANONIZATION OF FOUR BLESSEDS: GEORGE...

I will continue speaking about the spirit of the Assumption because it...

Marie Eugenie Milleret reminds us first of all of the importance of the...