How can we interpret the events in Ukraine?

On 27 February, three days after the beginning of the war in Ukraine, I celebrated mass in Russian in the Jesuit church of St. Casimir in Vilnius. The Russian-speaking community - of all nationalities - has been meeting there every Sunday for the past thirty years. We prayed for peace in Ukraine and that Russia's war against its independent neighbour Ukraine would end as soon as possible.

I follow the news from Ukraine showing videos of women screaming in the faces of Russian soldiers, in their own language, "Get out of here, go home!" Or the population of the already occupied regions waving Ukrainian flags and chanting: "Occupiers". The mother tongue of these women and men is probably Russian. Many people in Ukraine are like this. They consider Ukraine their homeland and are resisting the aggressors with all their might. It is not surprising that people who speak the same language feel they are citizens of different countries.

The current events in Ukraine are not a clarification of the relations between the two peoples but constitute a collision between two mentalities, two visions of the world and of its purpose. On the one hand, a democratic world where the human being is considered as such, and on the other hand, a world at the opposite end of the spectrum where only the grandeur of the empire counts and where citizens with contrary opinions end up behind bars (on the basis of false accusations) or are simply eliminated. I know this system very well, I lived it for 30 years. At that time, the violence machine was directed against the Church and against any expression of nationalism or any questioning of the communist system. In the West, few people realised the real extent of the situation here, because they were fed lies. This didn't make things any easier for us. My own family, like many others, suffered repression and I myself was repeatedly interrogated and threatened by the Soviet KGB secret service because I wanted to enter the seminary. The same imperialist vision today points the finger at other enemies, but that does not change its nature.

Let us not be fooled: war is here, with all its horrors, and if we do not clearly name the aggressor and the victims, if we do not stop the infernal machine that has been set in motion, who knows what else might happen.

The parallels between Adolf Hitler and Vladimir Putin are terrifying. As soon as they came to power, they established a dictatorship, constantly stirred up resentment over past defeats (World War I and the collapse of the Soviet Union), carried out a vast campaign to modernise and develop the army, made their party the only political force in the country, created ideologically based youth organisations and tried to win back lost territories and conquer new ones. Of course, times are different and not everything is repeating itself, but shouldn't we learn from history? It took time for the world to realise that it was not only naive but also criminal to believe that the annexation of Austria or the occupation of the Sudetenland was the only objective, that peace would be guaranteed and that the rest of Europe would not be impacted by resigning to these invasions. But the opposite has happened: these annexations have stimulated even more greedy predatory ambitions, which have caused unimaginable suffering and destruction throughout the world, including in Germany.

Ukraine is a free and independent country, which decides for itself how to live and with which partners it wishes to build its future. Are we entitled to divide countries into those that are free to decide their own destiny and those that must submit to the imperialist ambitions of their neighbours? Would this not be an obvious hypocrisy? Is the real situation not reflected in the determination of many Ukrainians to defend the freedom of their homeland at all costs and in the hundreds of thousands (soon to be millions) of people who are "voting with their feet" by fleeing the horrors of war, not to Russia but to the West?

No one should think that the sacrifice of Ukraine, the slaughter of people and the destruction of whole cities is the price to pay for peace.

No, that would encourage the aggressor to go even further. And who can predict the limits of his ambitions? As long as war is the answer to political questions, as long as basic principles of international law are violated, as long as the neighbouring country is attacked underhandedly and as long as the nuclear threat is brandished, security is not guaranteed anywhere and for anyone.

We must confront evil but we must not give in to anger. In the present situation, the words of Sviatoslav Shevchuk, Major Archbishop of Kiev and Halych, take on their full meaning: "We realise that in the end it is not hate that will win, but love." Love gives birth to heroes, hate to criminals. That is why I appeal to everyone: let us learn to love in this tragic time. Let us not let hate suffocate us. Let us not use the language and words of hate. There is an old saying that he who hates his enemy has already succumbed. We shall overcome by the power of our love for our country, for God and for our neighbour.

Let us pray unceasingly for peace and for the men and women of Ukraine and Russia. 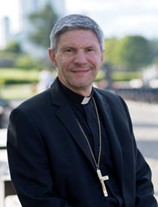 Archbishop Lionginas Virbalas sj joined the Society of Jesus in 1989 and was ordained a priest in 1991. A former rector of St. Casimir's Church in the Lithuanian capital Vilnius, he also served for three years as head of the Russian Pontifical College in Rome from 2010 to 2013. In 2013, Father Virbalas was appointed Bishop of Panevėžys. Since 2015, he has had the title of Archbishop of Kaunas, but also, since 2019, of Archbishop Emeritus. He coordinates projects and activities for the development of the pilgrimage shrine of the Virgin Mary in Šiluva.