CELEBRATION OF PALM SUNDAY OF THE PASSION OF THE LORD

HOMILY OF HIS HOLINESS POPE FRANCIS

On Calvary, two ways of thinking collided.  In the Gospel, the words of the crucified Jesus are in sharp contrast with the words of those who crucified him. The latter keep saying: “Save yourself”. The leaders of the people said: “Let him save himself, if he is the Christ of God, his Chosen One” (Lk 23:35). The soldiers said the same thing: “If you are the King of the Jews, save yourself” (v. 37). Finally, one of the criminals, echoing their words, said to him: “Are you not the Christ? Save yourself” (v. 39).  Save yourself. Take care of yourself. Think of yourself. Not of others, but only of your own well-being, your own success, your own interests: your possessions, your power, your image.  Save yourself.  This is the constant refrain of the world that crucified the Lord. Let us think about it.

Against this self-centred mindset is God’s way of thinking. The mantra “save yourself” collides with the words of the Saviour who offers his self. Like his adversaries, Jesus speaks three times in today’s Gospel (cf. vv. 34.43.46). Yet he did not claim anything for himself; indeed, he did not even defend or justify himself. He prayed to the Father and offered mercy to the good thief. One of his words, in particular, marked the difference with regard to the mantra “save yourself”. He said: “Father, forgive them” (v. 34).

Let us reflect on the Lord’s words.  When did he say them? At a very specific moment: while he was being crucified, as he felt the nails piercing his wrists and feet. Let us try to imagine the excruciating pain he suffered. At that moment, amid the most searing physical pain of his Passion, Christ asked forgiveness for those who were piercing him. At times like that, we would scream out and give vent to all our anger and suffering. But Jesus said: Father, forgive them.

Unlike the other martyrs about whom the Bible speaks (cf. 2 Mac 7:18-19), Jesus did not rebuke his executioners or threaten punishments in the name of God; rather, he prayed for the evildoers. Fastened to the gibbet of humiliation, his attitude of giving became that of forgiving. 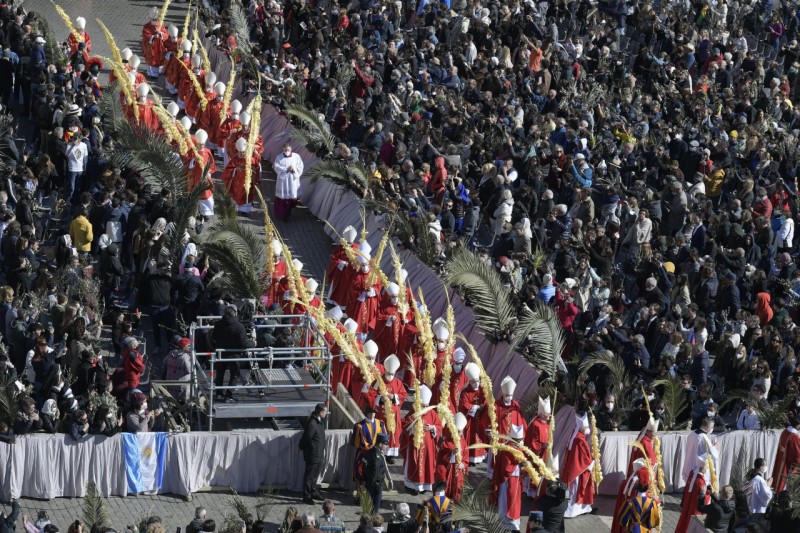 56th World Day of Social Communications
“We implore you on behalf of Christ, be reconciled to God” (2 Cor 5:20)
Third Sunday of Lent/ March 15, 2020
Call to Prayer: Coronavirus – COVID 19
Prayer with the Universal Church with Pope Francis
Share this: