In May this year the ground breaking encyclical of Pope Francis, `Laudato Si… on care for our common home’ will be five years old. This courageous and beautiful document, the fruit of much consultation, spoke a true and prophetic word to us all, to those who belong to the Church and those who do not. We were confronted with the truth of our situation and asked for a deep appreciation of the loving work of our creator in all the creatures of our world , He, who `saw that is was good, that it was very good’; we were also forced to look at the terrible damage that is being perpetrated to our soils, the air we breathe and the waters rivers and oceans and seas, through pollution and waste, and extractive industries affecting all our lives but particularly the lives of the poor and so many voiceless creatures. Everything is interconnected, the cry of the poor and the cry of the environment, the loss of species, the desecration of our life supporting mechanisms and the very web of life.

The encyclical has had an effect, some have taken this to heart in a true ecological conversion. It was heard not only by members of the Church but also many others, those already aware who have been working on environmental issues for many years who welcomed it with great gratitude, and those new to it. Slowly the reality is beginning to sink in, now the young are on the streets, non violent activists are popping up all over the world demanding more action on the climate emergency and the environmental destruction accompanying it. Many and various are the initiatives at all levels of government, local groups, NGOs etc.

About the same time as Laudato Si, five years ago the French edition of `Towards an Eco Assumption’ was circulated; the English and Spanish came some months later. Martine Tapsoba r.a. wrote in the introduction “What a beautiful intuition it was that our decision was taken even before the election of Pope Francis and his intuition to offer `Laudato Si’ to the Church and to the world”. It was at the Chapter of 2012 that it had been decided to get a document together on the ecological crisis, it’s causes, the structures exacerbating it as well as well possible ways forward, all from our experiences as Sisters of the Assumption from very many different parts of the world. 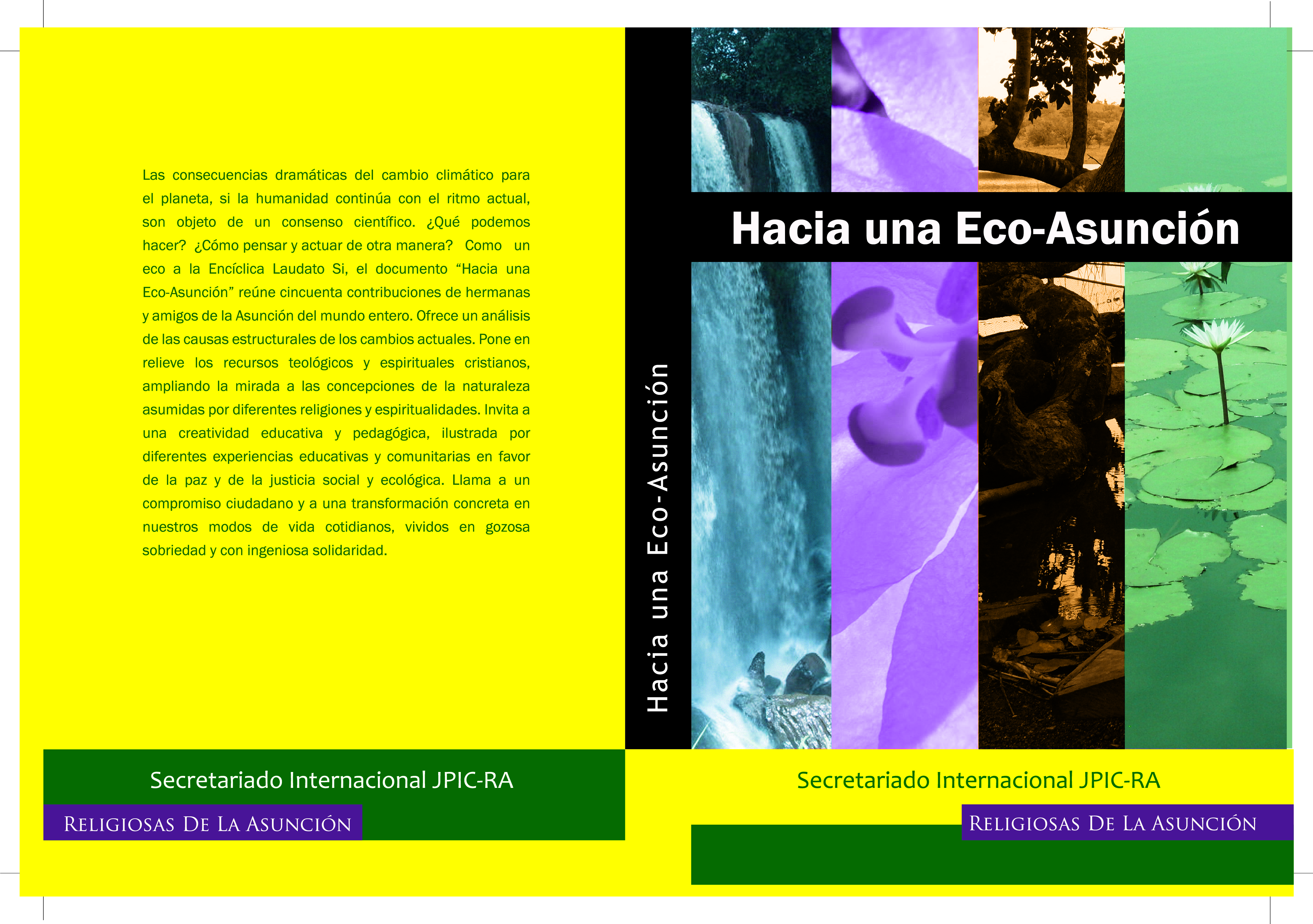 How reassuring it was to see at once that there was so much in common between Laudato Si and our `Towards an Eco Assumption’, even including sections on contributions from other faiths; the Pope was inviting all people to delve into their spiritual resources.. The need for ecological conversion, the communal efforts required are to be found in both documents. Laudato Si (181) denounced the global system of a short term, predatory, deregulated financialised system producing greater and greater inequalities and distress; it is clearly on the side of the voiceless promoting a genuine and profound humanism. It is there too in the Assumption document. Martine had written “…it aims to motivate and challenge us so that we give greater attention to the cause of ecology on which depends the future of our planet and all humanity. This is the way we can show the love we have for our time”’.

It was remarkable to those who were trying to get the Assumption document together how willing the Sisters were to contribute and at what depth and wisdom, we all know how busy Sisters can be. Perhaps it was recognised as call of the Spirit. But another aspect struck me which was that the seeds of this sensitivity are so present in the writing of Marie Eugenie. Would she not have been thrilled with Pope Francis’ encyclical! `We bless God for all that he has made in Creation, the earth, the sea, the mountains and valleys… and we call upon all creatures to bless Him’. “Adam’s principle function was to be a priest of creation, to give thanks…. Other creatures had a sense, a reason for being, created to praise God and to witness to His existence” (Marie Eugenie, Chapter of June 22, 1884) (LS. 83) “ the ultimate purpose of other creatures is not to be found in us’. God created us with the whole of creation in Love ( LS.77). There is an emphasis on freedom and creativity, on the great goodness of God, the merciful God who acts in history to heal, the importance of the virtues and the need for an education for transformation, a transformation of the whole of society. Marie Eugenie understood and felt the deep distress of the society of her time and felt driven to try everything to make Gospel values permeate it. For her `the earth was a place for the glory of God’, for Pope Francis too. ((Marie Eugenie, Letter to Lacordaire, “Credo”, cf. Origins 1, 2nd part).

Laudato Si talks of educating `for the covenant between humanity and the environment ( LS. 209) ` Living our vocation to be protectors of God’s handiwork is essential to a life of virtue; it is not an optional or secondary aspect of Christian experience’. (LS 218)` Only by cultivating sounds virtues will people be able to make a selfless ecological commitment (LS 211). Many more seeds of this type could be discovered I am sure.

Marie Eugenie prayed that` God would preserve in her the spirit of love for his Kingdom here below’(Marie Eugenie, Lettre au Père d’Alzon, n°1581, vol. 7, non datée) and she prayed `for the re-establishment of his kingdom in this world’ ((cf. Marie Eugenie, chapter of December 3, 1882).) Thanks to the Incarnation Christ is present with us and for Marie Eugenie this was the great mystery for her new Congregation. “All things have been created through Him and for Him” Col1.16. From the beginning of the world, but particularly through the Incarnation, the mystery of Christ is at work in a hidden manner in the natural world as a whole without thereby impinging on its autonomy’ (LS.99). Laudato Si, praise the Lord!`Are not five sparrows sold for two pennies? And not one of them is forgotten before God’ Luke 12.6. ` Let us sing as we go. May our struggles and concern for this planet never take away the joy of our hope’ (LS 244)Let us give thanks for Laudato Si, for our own small contribution to our times and for the gifts of the Spirit given to our Congregation through the insights of Marie Eugenie.

This was written before the extent of the pandemic became apparent. Now the young are no longer on the streets except in some places for doing the shopping for the vulnerable. Everyone is trying to cope as best they can with lockdown and loss. “All of us are linked by unseen bonds and together form a kind of universal family “(LS 89) wrote Pope Francis. We are now linked by this global threat to life and livelihood. But be assured once things return to more normal times the prophetic voice of Laudato Si will need to be heard loud and clear for the threat of climate and environmental chaos is even greater than what we are living through now.