God attracts – someone responds. This has happened, and still happens in the Church for more than twenty centuries. Jesus preached to the crowds; twelve responded .Later on, seventy-two responded. Women responded and followed him.

This continues to happen today. Jesus calls and touches the heart. Some people pay attention and perceive the joy of following him. They simply welcome the call and decide to follow him, forever.

We saw this, witnessed it, on August 14 of this year. Facing a great number of witnesses, Sister Andréia affirmed her firm decision: to follow Jesus in the Congregation of the Assumption  forever; to accompany Sister Marie Eugenie and all of her Sisters, present throughout the world, following Jesus: to live with him, in community, giving witness to his love and working for the Kingdom.

It happened at the Parish of Our Lady of the Assumption, in São Paulo, Brazil. The church was full: Sisters who live in several communities in Brazil; students,  alumni ,and alumnae from our school, parents, friends, neighbours, parishioners... A joyful and festive assembly. The celebration was presided by our parish priest, Fr. Juarez de Castro. Two other priests, friends of ours, concelebrated with him: the former parish priest and an Assumptionist.

During the liturgy, after the Gospel proclamation, the simple, deep and touching rite: the dialogue between Sister Andréia and the Provincial. Sister Judite. The link between Baptismal consecration and the religious consecration  becomes clear, between the following of Jesus and the self-giving of religious life .After each  proposition, Andréia answers in a clear and decided voice: “Yes, I do”.

The gesture that touched many people follows: Sister Andréia prostrates herself facing the altar while the congregation sings the All Saints Litany. We ask all the Saints to intercede for Sister Andréia and for all of us.

And so we arrive at the key moment: the Sisters of the Assumption approach, sister Andréia’s family, students, alumni and alumnae, friends follow. All of them attentive and full of emotion. In the presence of so many witnesses, saying the words of the Profession, Sister Andréia becomes a Sister of the Assumption until her death – forever. She receives the solemn benediction, given by the celebrant. She also receives the ring, a covenant of love that will be a visible sign of her self-giving. A word is engraved on this ring, a motto that will motivate all her life:  “I come, oh Lord, to do your will with pleasure”

After that comes the Eucharistic rite, important, of course, but already known. Jesus makes himself present. He gives himself to each of the participants in Communion. It’s the seal of a love that, in him, went to the death on the Cross and blossomed in the Resurrection.

Religious consecration is an act of faith, an act of self-giving in love, an act of trust in God who is Love, in a covenant that will last throughout eternity. 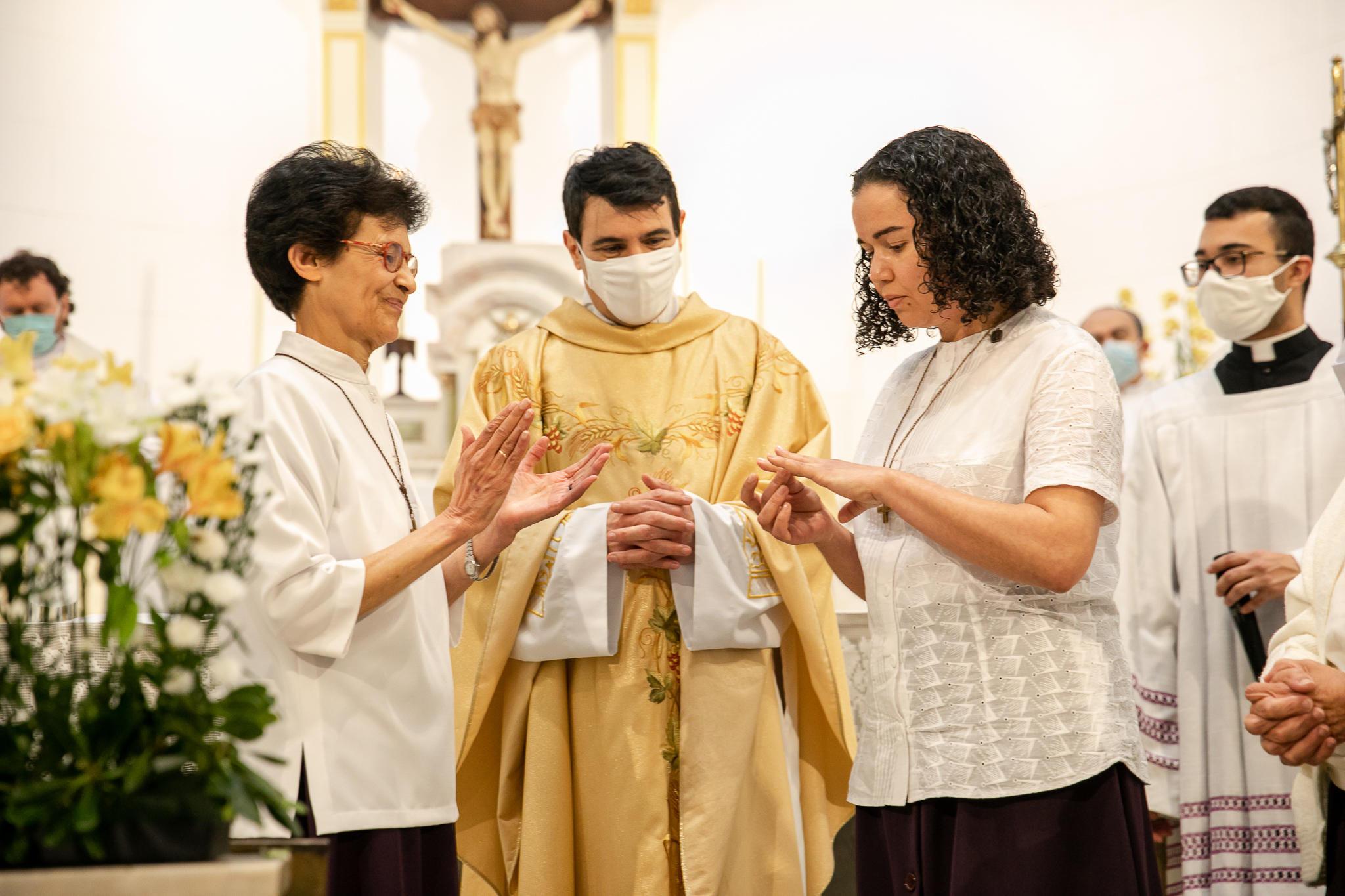