The Deep Joy of Easter

"However, I do not know if you feel, as I do every year, that the joy of Easter, at first sight, is a deep, profound joy, a joy of eternity. For the Apostles, for the disciples, for the whole nascent Church, after having seen our Lord in such suffering, in anguish, the hour of the resurrection was an hour of joy, no doubt, of joy, which, like every passage from sorrow to great joy, must have had something serious and solemn about it." (St. Marie Eugenie of Jesus, April 14,1879)

The joy that fills us today, for the beatification of ten martyrs of Quiché: three Spanish priests, Missionaries of the Sacred Heart of Jesus; José María Gran, Faustino Villanueva and Juan Alonso, together with seven lay catechists; Rosalío Benito, Reyes Us, Domingo del Barrio, Nicolás Castro, Tomás Ramírez, Miguel Tiú and Juan Barrera Méndez (a 12 year old boy) is a Paschal joy, a deep joy, as Saint Marie Eugenie tells us since  these 10 martyrs were assassinated between 1980 and 1991, in the context of the armed conflict, which lasted 36 years and in which grave violations of human rights and the rights of indigenous peoples took place:

The Commission for Historical Clarification -CEH- registered a total of 626 massacres committed by the State Security Forces, 420 of which occurred in 18 months (1981-1983).

At the beginning of the 1980s, it is estimated that between 500,000 and 1.5 million people had to flee as a direct consequence of the campaign plans and military operations that the army developed to regain control of the civilian population in the conflict areas.  Forty-five thousand people disappeared. The enforced disappearances spread terror and fear among the population. This form of violence was mainly carried out by the State, through institutions such as the National Police. https://memoriavirtualguatemala.org/?page_id=1913

Therefore, to contemplate their PASCH is to RECALL the anguish and suffering caused by the abuses perpetrated historically by the Guatemalan State against the Mayan peoples, peasants, and the civil society that raised its voice to denounce these abuses. It is also to remember their generous dedication to the extreme, to the last consequences.  As the Bishop of the Diocese of Quiché, Monsignor Rosolino Bianchetti, beautifully tells us:

"Like Jesus, our martyrs passed through this world doing good, following him as Master and Friend. Their lives were characterized by their work as promoters of justice, peace and a life in accordance with the plan of God, our Father, urged on by the love of truth, justice, freedom and the poor and excluded. From their communities they wanted to build a more dignified life, diminished by injustices, greed and discrimination. Thus, day after day, they assumed God's project. Until the day of their martyrdom, they tried to open spaces to offer everyone an alternative life in the face of governmental policies of death expressed through repression, kidnappings and massacres". Letter of Monsignor Bianchetti taken from: http://www.radioscatolicasdequiche.org/radioquiche/images/docs/carta_de_mons_bianchetti_martires_de_quiche.pdf

A criterion of discernment to recognize the resurrection that Jesus Himself gives us, in the stories that narrate the appearances of the Risen One, is that He shows concrete signs, His injuries, His wounds; He shows Himself to us serving, breaking and sharing the bread. That is what we contemplate in these ten martyrs!  The injuries and the wounds of these people, of so many martyrs of this period of the Church in Guatemala, but also the life broken and shared by concrete signs of the transformation of society, in the following of Jesus. This led them to martyrdom.

The martyrdom of Juanito, Juan Barrera, a 12 year old adolescent, a First Communion catechist with a passion for Jesus, stands out in a special way. He was interrogated by the army, tortured and hung on a tree, "like Jesus". What an inspiration for all of us, but especially for the young people of today!

To celebrate this Pasch is to give voice to those who were "apparently" silenced because they were killed and to continue the journey towards the Kingdom, committed to the Gospel, although, as Monsignor Gerardi says in his speech when he gave the Report on the Recovery of the Historical Memory in Guatemala in 1998: "the construction of the Kingdom of God has risks and its builders are only those who have the strength to face them", in a context in which injustices and inequality are more evident. http://www.remhi.org.gt/portal/discurso-de-monsenor-juan-gerardi-con-ocasion-de-la-presentacion-del-informe-remhi/

Let us pray, as the chorus of the hymn composed for the occasion of the Beatification says:

WHO FOUGHT WELL IN THE BATTLE OF THE FAITH.

INTERCEDE BEFORE GOD, SO THAT

WE, TOO, MAY NOW BE ABLE TO

//FIGHT FOR THE KINGDOM OF GOD, WITHOUT LOSING HEART// 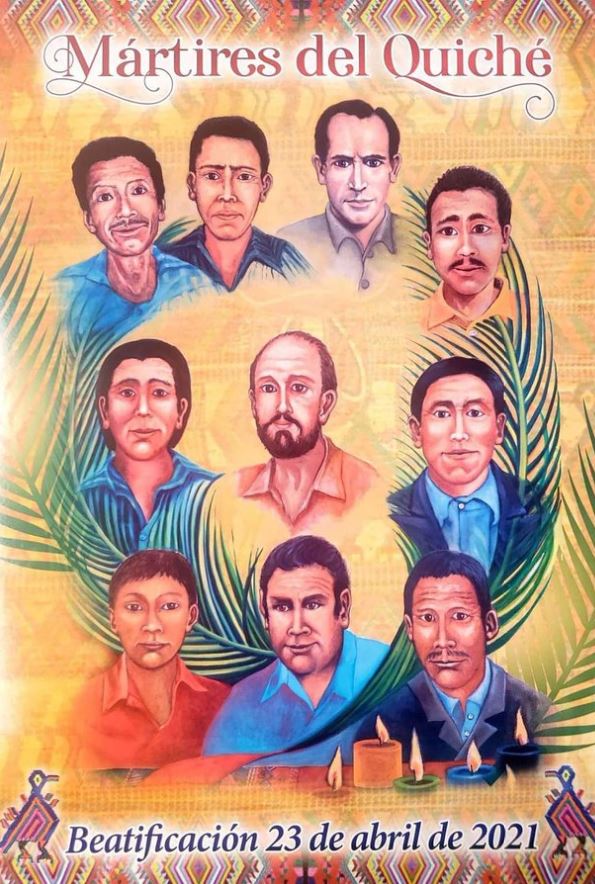