Talitha Kum emerged in 2009 from the shared desire of consecrated women to coordinate and strengthen anti-trafficking activities in the five continents. It is a network of networking set up by the International Union of Major Superiors (UISG) in collaboration with the Union of Superiors General (USG). It supports any initiatives against human trafficking respecting diverse contexts and cultures. In the Gospel of St. Mark (5, 14) when Jesus says to the daughter of Jairus who was lifeless "Talitha Kum", he then takes her by the hand, and immediately gets up and begins to walk. "The word "Talitha Kum" has the transforming power of compassion and mercy that awakens the deep desire for dignity and life, a desire that is weakened and wounded by many forms of exploitation. »

The province of West Africa is involved in this network in Burkina Faso and Côte d'Ivoire. In Burkina Faso, in the Diocese of Bobo Dioulasso through Talitha Kum, we have lived several experiences with migrants and vulnerable people whose precarious situation exposes them to human trafficking of all sorts. Among other activities, awareness campaigns on the consequences of migration and human trafficking have been initiated in various places: schools, public spaces, parishes etc. In the same dynamic, there has been a networking with associative structures and NGOs, in collaboration with security agents, to report certain proven situations of human trafficking.

In search of better living conditions, several young girls migrate to other West African countries. Often trapped by human trafficking networks, they see their lives turned upside down because they find themselves in prostitution networks or "placed" to work while someone else gets their salary. Thanks to the collaboration between Talitha Kum Burkina and Talitha Kum USA, several victims from Togo and Niger have been repatriated to their country of origin. Specific attention is also focused on the professional training of the victims with a view to their financial independence and reintegration into society. Furthermore, when their case is submitted to the judicial authorities, support is provided to help them regain their legal status.

To promote Talitha Kum's high visibility, the network's most significant dates are particularly celebrated, providing an opportunity for greater awareness. This is the liturgical celebration of Saint Josephine BAKHITA on February 8th, World Day of Prayer and Reflection on Human Trafficking. To this occasion, on February 7, 2020, we have organized a prayer vigil on which former victims have given their testimony. On February 8th, we celebrated the Eucharist for the victims and for the conversion of all those who organise these trafficking operations. The other two important dates for Talitha Kum are 30 July, World Day against Trafficking in Human Beings and 18 th December, International Migrants Day.

"To provide light, we need to be nourished by light", says Saint Marie-Eugénie. In order to strengthen the skills of the diocesan centres of Talitha Kum Burkina, a training session was organised on 02 to 04 October 2020.

Regarding the prospects for this pastoral year, Talitha Kum Burkina is planning to work with associations and NGOs in a network to strengthen the implementation of laws against human trafficking in the country. It will also strengthen the capacities of victims and vulnerable people by providing support with school and professional fees.

In Ivory Coast, Talitha Kum was created following Sister Danièle Rozière's involvement from the religious family of the Xavières sisters in a session organised by the Network in Burkina. Talitha Kum in Ivory Coast is in its early stages and our communities in Abidjan are taking part in it. For the time being, the network has succeeded in bringing together many Congregations to make Talitha Kum dynamic in this country and more precisely in Abidjan.

The priority has been given to member's training. Therefore, the coordinator in collaboration with a European organisation has been able to obtain a fund for the formation of some sisters in the field of spiritual and psychological accompaniment. Talitha Kum Abidjan is also considering building a centre of accompaniment and education to life. A training session will take place on February 15th to 20th, 2021 after which we will consider activities to be carried out. We have also involved lay people in the study of the environment. Thanks to their help, we have been able to identify cases of vulnerability in Abidjan city: trafficking in maidservants, trafficking in humans, sexual violence, prostitution.

Being a member of Talitha Kum to work towards stopping human trafficking in our West African countries is a delicate mission which requires us to remain in God's strength through prayer.

Why is our province committed to Talitha Kum association?

Talitha Kum fits in with our charism and spirituality. We live our commitment towards this network as a response to the General Chapter's call in 2018, taken up in our province project: "to commit ourselves in Assumption Together for JPIC-S in our small spheres" by participating concretely in the different sensitivities on the realities of migration, human trafficking, drugs and esoteric society, in order to work as a network to fight against all forms of exploitation. Talitha Kum is an efficient means to prevent human trafficking as the people helped and supported find ways of success and happiness by the grace of God.

Moreover, this commitment is a concrete response to the call of Pope Francis in Laudato si' to Human Ecology. Wherever the dignity of the human being created in the image of God is violated, we also feel called to an incisive commitment so that it may be rediscovered and respected.

The communities of Bobo Dioulasso-Noviciat (Burkina Faso) and Abidjan-Juniorat (Ivory Coast) for the Province of West Africa. 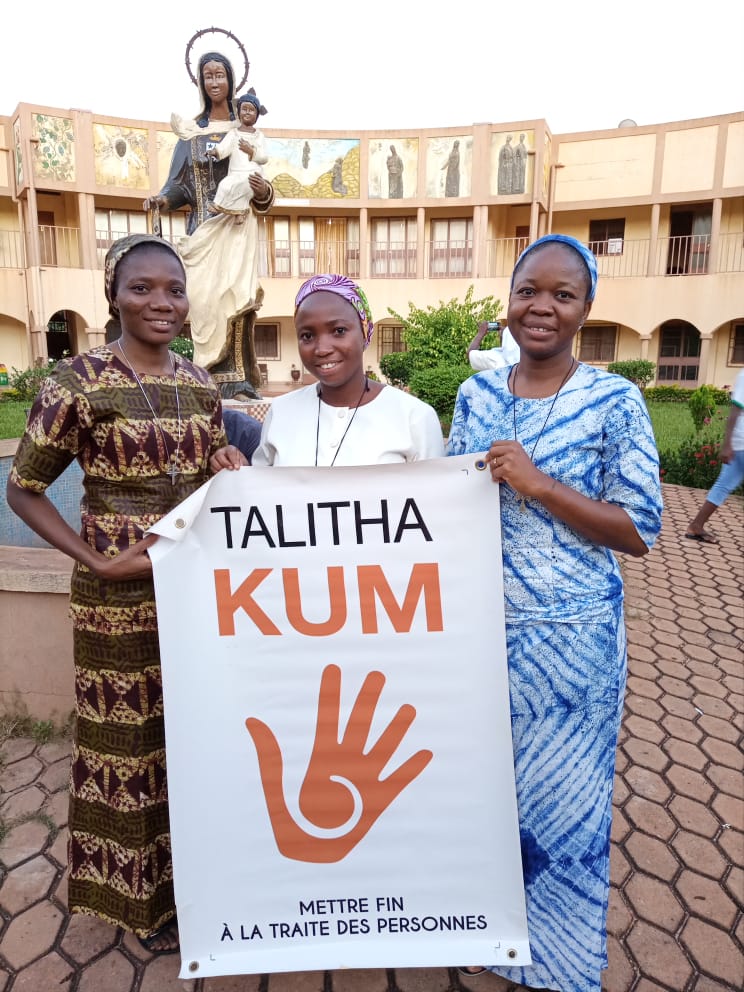