“The Assumption grows in Africa, gift and task”

To understand today’s Africa is to begin with the Berlin conference of 1885 convened by German chancellor Bismarck. There was the threat of a Europe-wide war over Africa coming among the stakeholders: Germany, France, Great Britain, Belgium, Netherlands, Portugal, Spain & Italy. The solution? Partition Africa. No Africans were present in this meeting that was thinly disguised as an effort to help Africa. This was ‘the scramble for Africa’ as informal imperialism of control through military influence and economic dominance transitioned to direct rule.Today, many of the tribal wars and border conflicts in Africa are rooted in this arbitrary dissection of Africa cutting across tribes and traditional and cultural boundaries.

The Assumption and Africa

This was the Africa Marie Eugenie would have known towards the end of her life. European exploration of the African interior had already begun in earnest at the end of the 18th century when in 1849, Marie Eugenie received the invitation for missionaries to British-controlled South Africa. She was impassioned to respond to the request of Bishop Devereux of the Cape for four Sisters to administer a school for girls in Grahamstown. The Sisters, new to religious life and to their charism still-in-the-making, found themselves overwhelmed by the ordeals of the mission. This was aggravated by the distance and the poor communication with the Motherhouse. In the end, Archbishop Sibour of Paris, who had oversight of the young congregation, ordered their recall. Sr. Gertrude, the leader of the community, chose to stay on with the new candidates she had accepted and formed to respond to the radically new context they were in. This would eventually become the congregation of the Missionary Sisters of the Assumption.

It would not be until the 1950’s with the encyclicals Evangelii Praecones (1951) and Fidei Donum (1957) of Pope Pius XII which presented the condition of Catholic missions especially in Africa that the Assumption, in the person of Mere Marie Denyse, would once more hear the irresistible call to extend the reign of God in Africa. Despite the interruptions created by World War II, there had been a steady growth of the Church in Africa. There was a dearth of good, solid Christian education to bring the Christian truth in the formation of the new Christians. The Assumption felt they were now ready and responded with zeal to the invitations of the Bishops. This was first in East Africa in Rwanda, then Tanzania. Then it was West Africa in Ivory Coast, Burkina Faso, Togo, Niger, Benin, then Central Africa in Cameroon and Congo, and onwards to Kenya and Chad. And in 2015, God stretched their tents to embrace their new Sisters from the Augustinians of Notre Dame de Paris (ANDP) in Madagascar.

Missionaries from France, Spain, Italy, Belgium, England, even from the younger provinces of the Philippines and India came and opened schools, both college and technical, dispensaries, run catechetical and literacy classes, initiated livelihood projects for women, agricultural projects, did pastoral work in parishes and centers, etc. AMA volunteers joined the Sisters in their mission. The Sisters were also asked to accompany the foundation of local congregations.

Like their fellow missionaries who responded to the Pope’s call for Africa, the growth and achievements of the Church and of the Assumption in Africa are due largely to the heroic and selfless dedication of generations of missionaries. It is thanks to those ‘giants’ of the Assumption who laboured with unstinting generosity that Assumption-Africa lives and flourishes today. They courageously surmounted challenges of language, culture, diseases, harsh climatic and travel conditions, that the seed of the Assumption may take deep roots in African soil and grow strong branches. The charism found fertile ground in the hearts of young African women as vocations soon came from every Province of the continent. Today, there are 303 Sisters in the 13 countries that make up the 4 Provinces and 1 region of Africa. They comprise 26% of the membership of the Congregation. 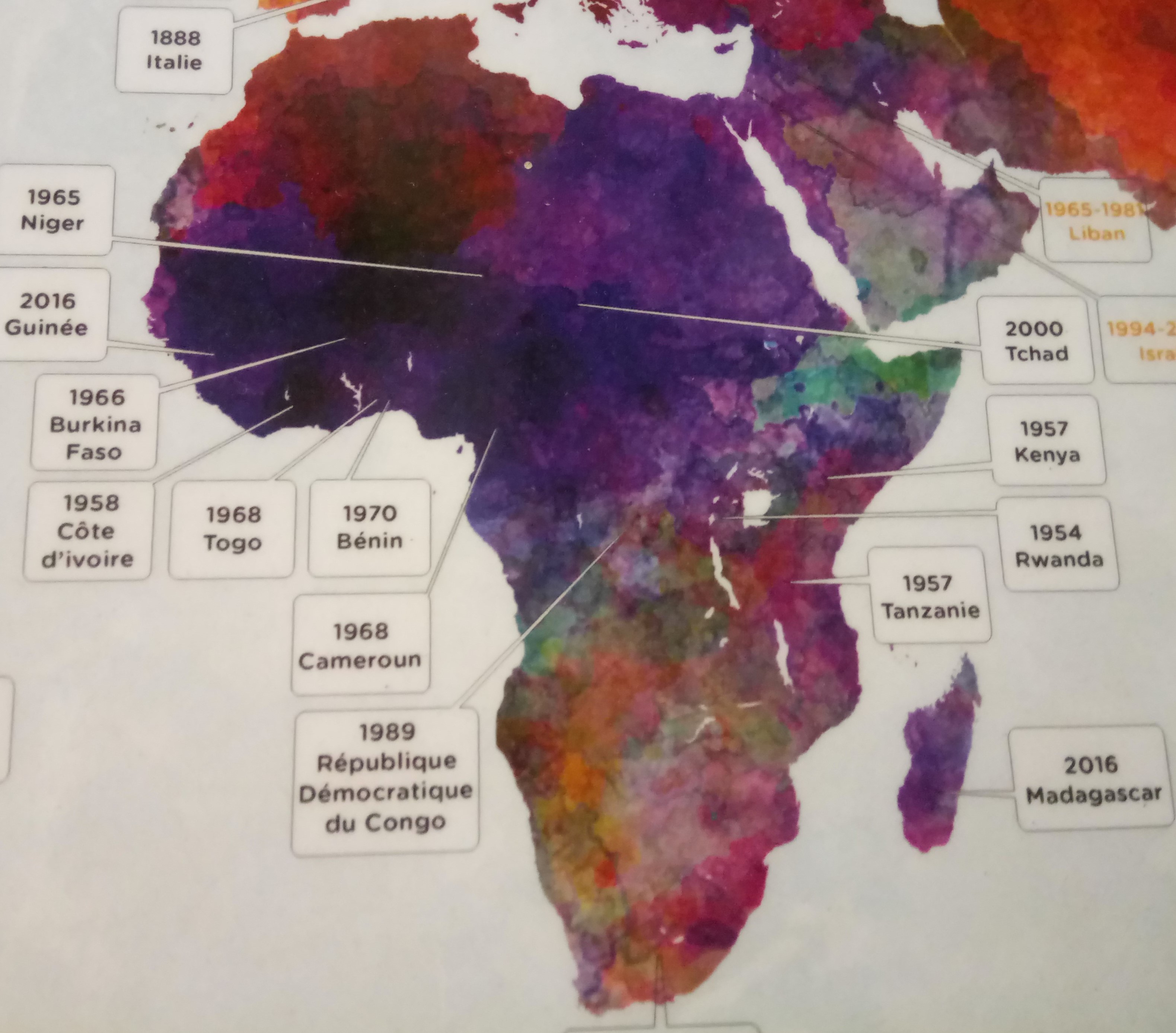 However, it is not right to begin Africa’s story just with its dissection by European nations. More importantly is how humanity traces its origin to a common ancestor 5-10 million years ago to a hominid in Africa who began to walk upright. These used their physical capabilities to enlarge their brains, develop the technology of stone tools…and begin to explore… crossing the seas to Asia and Europe. This implies that all modern people are ultimately of African descent. Does this reality of the origins of humanity in Africa have any import for the world today?

A great Saint of Africa, St. Daniel Comboni, had seen from the beginning how Africans could become protagonists of their own process of liberation and evangelization. His clarion call was “To Save Africa through Africa…” It was a 180º turn from the mercenary intent of the Berlin Conference. With the growth of the Church and of the Assumption, this is becoming more and more the reality. A new generation of leaders in both the Church and religious congregations are taking their place with their gifts at the service of the life of their people. They now carry on their shoulders the major part of the work of evangelization of their continent. Many sons and daughters of Africa now took into their own hands the torch of total consecration as religious to the service of God and the Gospel.

A gift and a responsibility

The Synod of Africa (1995) attests that the tremendous growth of the Church in Africa over the last hundred years and the fruits of holiness that it has borne can have only one possible explanation: all this is a gift of God. No human effort alone could have performed this work in the course of such a relatively short period of time.

It is this gift that is at once a task and a responsibility that both the Church and the Assumption recognize as a privilege and an opportunity. Africa is today called to an exchange of gifts as African missionaries are asked to support the new evangelisation in the now secularized countries which once produced missionaries who first went forth to Africa to announce the Good News.

Africa is endowed with a wealth of cultural values and priceless human qualities that it can offer to the Churches and to humanity as a whole. Africans have a profound sense of the sacred, of the existence of God the Creator and of a spiritual world. In African culture and tradition, the role of the family is fundamental. With this comes love and respect for life, a love for children who are joyfully welcomed as gifts of God. Africans show their respect for human life until its natural end, and keep elderly parents and relatives within the family. African cultures have an acute sense of solidarity and community life deeply embedded in their core values of Ubuntu (humanness and moral regeneration) and “Umoja” (togetherness). These values are key to the effective reversal of the Continent’s dramatic situation and facilitate the emergence of a new post-pandemic world. Would Ubuntu and Umoja be part of Africa’s cultural DNA that is her gift to the Assumption, too? These are precious values which have to be nurtured in the young in religious formation and in our schools if we are to contribute to a continent of reconciliation, justice and peace.

There are 1.31 billion people (17% of the world’s population) in the 54 countries of the continent. Africa is huge with a land area of 30.37 million sq km — that can fit in the U.S., China, India, Japan, Mexico, and many European nations, combined. Africa is a resource-rich continent of both natural and human resources, rich fertile land and deep cultures. Yet, today, Africa continues to live the great irony of being impoverished by its wealth.

The heart-breaking drawback to Africa’s economic development is primarily a problem of governance by their own leaders. After their long courageous battle for independence from their colonizers the people find themselves with leaders who privatize the state and directly steal from the state and the national treasury. Politicians who are the richest persons of Africa siphon off foreign aid and peddle their country’s resources to foreign corporations. They are party to the extensive land grabbing of over 10 million hectares of prime land by foreign investors for supposedly global food security. Dispossessed, hungry and destitute Africans end up risking their lives as migrants, victims of human trafficking, and suffering from diseases like HIV/AIDS that leave kids orphaned. An estimated 32.1 million orphans live in Africa, many of them taking charge of households at very young ages. Poor infrastructure of transport, power and digital connectivity leaves Africa behind the rest of the world. Only 13.5% of the African population have Internet access - a distressing absurdity when the mineral coltan (columbite-tantalite) used in the development of computers, cell phones and electronic devices largely comes from Africa.

The response of faith

What has been the Church’s response to this reality? From the beginning, missionaries have set up social service institutions that redeemed slaves and rehabilitated them. They have established Christian villages, provided education and skill training empowering people, especially women. They have put up healthcare institutions reducing mortality and diseases. They fought against poverty by providing training in agriculture, irrigation and technology to farming communities. Church people have risked their lives standing for the cause of justice, creating networks to promote and advocate for the dignity and fundamental rights of the exploited. They built bridges across ethnic communities, nurturing the democratic process, forming the youth who hopefully will create a better tomorrow for their nations. They laid the foundation for a strong religious life that has led to the flourishing of priestly and religious vocations as well as the birth of new religious congregations. A significant indicator is the exponential growth of the Christian Population in Africa as the figures show:

Endowed with the presence of the young, a critical priority is formation. Formation that will make them truly African and truly Assumption, able to bring the gift of the charism for the life of their people. This has further been highlighted by the arrival of the many young Sisters from Madagascar, with their faith and cultural gifts that enriches the Assumption. Transformative education in their schools, from pre-school to college…with quality education characterised by faith, character formation, social responsibility and academic excellence as the trademark they give to the youth. They want to form transformative leaders not only for the Africa of tomorrow but even now, for the Africa of today. This they undertake with lay partners in Assumption Together who are committed to Marie Eugenie’s spirituality and principles of education. Sustainable in terms of human resources, a shared concern of all the provinces is to arrive at financial sustainability. With creativity and resourcefulness they initiate projects that will ensure the life and mission of the Provinces. In a continent where the Assumption is already present for over 60 years, a concern is the care of their aging first Sisters, the pioneers who are now their powerhouse of prayer and contemplative energy.

The context and the challenge shared by the Sisters in the 13 countries of Africa and Madagascar lead them to collaborate and network as a continent. An African proverb says, “When spider webs unite, they can tie up a lion.” The needs and demands of the mission may be formidable but united and sharing resources they discover their strength and potential to do and to be more. They have continental sessions for educators, formators, provincial councils, the young and the professed Sisters. They experience the Congregation as the “wind behind their back” in their efforts to truly make the Assumption in the continent a precious gift to the Church and to their people.

At the service of communication
"Fondation" du magazine #Assumpta
Evangelizing on the net
New issue of #Assumpta magazine
Editorial #Assumpta - nº3
Share this: