Europe Province: A pilgrimage to the roots

In 2022 Lithuania will celebrate the 50th anniversary of the Chronicle of the Lithuanian Catholic Church, the "samizdat" that the KGB never managed to stop. A year ago I received a journalistic invitation to write a children's book about the Chronicles and to prepare a series of articles. The subject was not foreign to me because in religion class I often talked to students about non-violent resistance, the struggle for human rights, and religious freedom. So this summer, with a friend who is a cartoonist, we started to write this book which should be published in February. In this context, this summer we visited several places related to the Chronicle, and in September I participated in a two-day expedition with Cardinal Sigitas Tamkevičius (some of you may still remember his testimony) and sisters Regina and Bernadeta, who in their youth were actively involved in the editing and distribution of the Chronicle. In the company of cameramen we travelled about 1,000 kilometres in the south-west of Lithuania, visiting small villages where priests who were active during the Soviet era worked. Security prevented them from ministering in the cities, but those involved would meet them in the most remote corners. Zdebskis' small rectory (see photo), for example, was used for retreats for young people and nuns. Such a "tour" with living witnesses of history is an indescribable experience.

Photo: In front of the rectory of Fr. Zdebskis with Sr. Regina (a little bombshell always full of energy and humour)

The Chronicle started in Simnas where Fr. Sigitas was appointed curate in 1972. At that time, his friend, Fr Juozas Zdebskis, was arrested for catechising children. Sigitas, after consulting with his bishop in exile in northern Lithuania, began an underground publication, the Chronicle. It came out about every three months. On the first page it was written: after reading, pass it on to someone else. And so it travelled secretly from hand to hand. It's a story we all know, but it's extraordinary to be in the church of Simnas with Cardinal Sigitas, to see him open the reliquary of the side altars and open the hole in which he threw his manuscripts. The baptistery also has a double bottom that served as a hiding place. A double plank in the garage door was another. This year, to commemorate the anniversary of the Chronicle, the Cardinal's diary, which he wrote since 1972, will also be published. I read the manuscript in one evening. It reveals the human drama of the time, because these people were not superheroes. They were very scared, they knew what was threatening them. For example, in 1983, just before he was arrested and imprisoned, Fr Sigitas wrote a memorial which he distributed to his friends. In it he said that if he ever denied his beliefs, started supporting the Soviet government or signed a cooperation agreement, "know that it is not me, it is what I am doing because I have been broken by the police"... We visited another village where in 1970 an underground seminary was established by Father Jonas Lauriūnas SJ and fellow Jesuits in a rectory buried deep in the forest, because Security was increasingly limiting the number of entrants to the Kaunas seminary. It was an avant-garde seminary, because Security in Kaunas did not allow teaching Vatican II theology, while the Jesuits secretly received theological literature from the West and tried to follow Church events as much as possible. A former student of this seminary who worked as sacristan in the village church, tells that for spiritual guidance with Father Lauriūnas, they went to the forest supposedly to pick mushrooms, but in fact to make sure there were no listening devices. There are many such stories, but others are not told out of mercy, as there are many former collaborators still alive who still hold high positions. 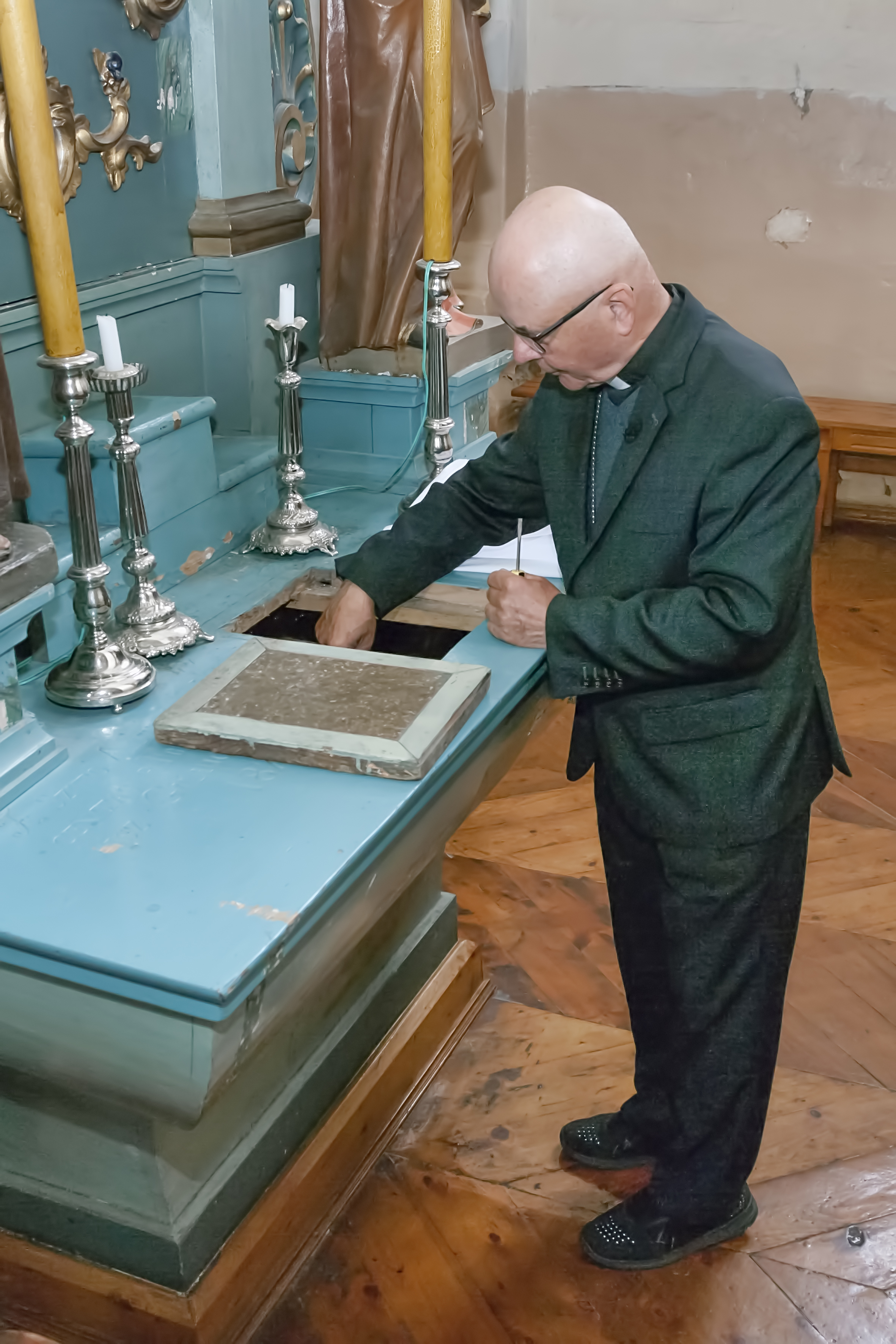 Photo: Hiding in the altar

What does this experience mean to me? An immense recognition. The perception that after the Second Vatican Council, when the theological thought and the life of the Catholic Church were expressed in the West in the big cities, here they emerged in small lost villages, which are still reached today by dirt roads and which the GPS does not know. The convents and monasteries had disappeared, but religious life had become very close to the people. Catechising children required a courageous determination, rooted in faith. Our generation has the responsibility not only to gather this experience from the past, but to put down roots in it. This is particularly important to me as I leave Lithuania for England.