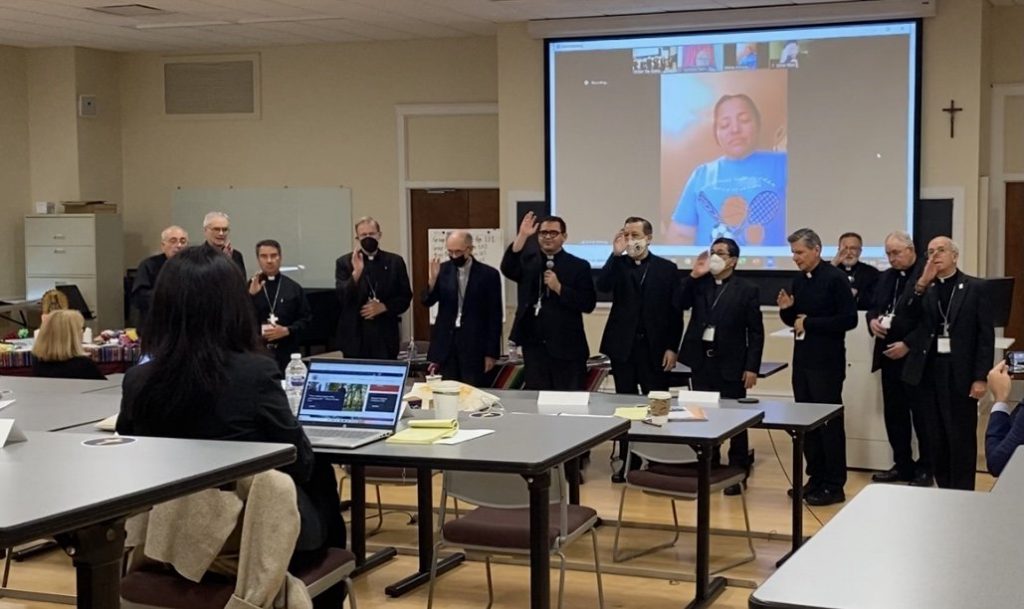 Bishops from the U.S., Central America and Mexico face the camera at the chapel of Mundelein Seminary outside of Chicago June 2, 2021, to bless a Salvadoran woman via Zoom who shared her story of immigration with them. Along with Vatican representatives and Catholic organizations, the prelates participated in an emergency session June 1 and 2 to set forth the U.S. church's response to immigration as well as to seek greater collaboration with bishops from countries where some migrants are coming from. (Credit: Rhina Guidos, via CNS).

NEW YORK ­­­– At an emergency immigration meeting this week, a prominent moment for Bishop Mario Dorsonville was a conversation with an El Salvadorian bishop who described the growing emptiness of some of his diocesan towns.

“[He] told me, ‘it’s sad for my diocese that some towns are kind of empty and left only with the grandparents, but all of the parents and youth are gone,” Dorsonville, an auxiliary bishop of Washington and the U.S. Bishops’ Conference Committee on Migration chairman, recalled to Crux.

The conversation came out of a broader discussion on the root causes for migration, which Dorsonville identified along with an approach to advocacy and the importance of collaboration and co-responsibility between the Church in the United States, Central America and Mexico as three focus areas.

In a conversation with Crux, Corbett called it “remarkable” that these different voices came together, and said it was especially important to have the participation of the bishops from Central America and Mexico to renew the commitment to cross border collaboration.

“There was recognition that we’re in a unique moment right now when the Catholic voice might have something very important to contribute in terms of the national conversation on immigration,” Corbett said. “It’s an opportunity for us to speak with a common voice to lawmakers for reform that’s grounded in principles like human dignity.”

Addressing root causes is one of those areas. Violence, climate change, corruption, political instability, and a lack of education and opportunities for success were among those discussed. Corbett noted a strong commitment, especially on the part of the Latin American bishops, to engage the Biden administration when they’re also committed to addressing the root causes.

“To work with [the Biden administration] specifically on developing credible plans that reflect our understanding of integral human development [is] long-term work that will yield long-term benefits,” Corbett said.

Dorsonville said it’s also important for prelates on both sides of the border to understand what the root causes are to properly address migrants in their communities.

“It was important for us to go deeper and to see how we continue to be very open to embrace those who come, but also how bishops in the region will continue to promote a sense of love, respect and create some future development for the children and youth,” he said.

A path to citizenship for Dreamers, Temporary Protected Status (TPS) recipients and farmers is another area that Bishop Dorsonville said the bishops see as a top priority.

“You see them right there producing their very best for the country. They feel a part of the country, they love the country,” Dorsonville said. “They have not only been giving their work but their contributions to the economy then I guess that it would be extremely important in consideration of these families that have been in such difficult times through the years.”

He noted, however, that the church is not the government and isn’t called to create laws, therefore, what they have to do is provide constant and direct service to migrants, and speak on behalf of the people they serve.

“When politicians, and especially Congress, see’s the testimonies of people and they begin to know their faces and their stories they are so moved with beauty and compassion,” Bishop Dorsonville said. “Both parties have to come together and finally be united in the resolution of making what this country has been recognized as through the years – a country of immigrants, but also a country of truth, justice and peace.”

Another aspect of that advocacy that the bishops agreed upon, he added, is making sure migrants always feel welcome to a Catholic community no matter where they travel.

“We are one church and we feel co-responsible in how as that person continues to migrate, there is going to be a parish that welcomes them because they are children of our lord and we have the devotion for the human drama they are going through and our ability to walk with them, be with them, and give that voice of hope and faith and love is so important,” Dorsonville said.