And Love took us to the frontiers ... to bet on life

or too long for us.

But I know that nothing that we experience

makes sense, if we don't touch the heart

Many times it is enough to be:

an arm that embraces,

a word that comforts,

(…) And that is not something from another world,

it is what gives meaning to life,

it is what makes life

be neither short nor too long,

but rather be intense, true, pure….

(Know How To Live, Cora Coralina)

In fidelity to the spirit of our 2018 General Chapter, which invited us to be servants of Life in the midst of the most vulnerable, our Province allowed the breath of the Spirit to bring us to MUISNE, Esmeraldas, an area forgotten by the central government, one of the most impoverished provinces of Ecuador, an Apostolic Mission Vicariate, entrusted to the Comboni Missionaries for 50 years.

The Bishop, Monsignor Eugenio Arellano (who was also the President of the Ecuadorian Episcopal Conference) offered to us the accompaniment of two schools (with 1200 students) - which were completely rebuilt after the 2016 earthquake - and the pastoral care of 96 small rural enclosures. We share this last mission with a community of SVD, missionaries from Asia who are also trying to inculturate themselves.

I was assigned to the "Enchanted Island" - as they call our enclosure - in January 2019, to return to my town, after 6 years in the Mother House, entering through the narrow door of poverty and incarnation, in a beautiful adventure like that of those explorers from the land of promise.

We are now a community of 5 Sisters, who, since our being sent here, have shared, at different times, the life and mission in Asumption Together, with three enthusiastic lay women committed to our charism (Emilia, a former teacher from our Guayaquil school, member of the Way of Life, Valeria, a dentist, our former student now in professional practice, and Isidora, a young Chilean AMA). We arrived with great enthusiasm, ready to remove our shoes to get to know a culture and a totally new reality for us, because Esmeraldas is like another country, within our country. And although we are not yet two years old, we already feel part of this town ... while maintaining a frame of mind open to surprises, admiration and compassion.

It is a very poor reality on many levels. Poverty has left wounds in the way of being of the people and in their reactions. Families are very broken and dysfunctional. Our children and young people are children of that profound dysfunction experienced in the home which are such simply because there are almost no stable couples or family nuclei to protect and care for them. Women are totally devalued, there is a lot of promiscuity, unemployment, with an economy of survival, with the constant threat of drugs and easy money. There are also exposed to the onslaught of nature ... currents, tides, floods, tsunamis, earthquakes, etc ...

Here the stereotypes of family, pastoral models and ecclesial projects are broken as are preconceived answers. And if Muisne knew about vulnerability and fragility, the pandemic came to further expose this precarious reality and to completely unsettle us. When we believed that after a year we could move on with greater assurance and start offering more concrete proposals, we realized that the slogan still remains: LISTEN AND DIVEST OURSELVES; to accept uncertainty and walk on trying out every step, being creative and giving way to a prophetic imagination! We continue to discover our people, an amalgam of simple faith, of luminous gestures of solidarity, of generosity, nobility and joy, of stubborn commitment to life, immunized with resilience and strength, but also infected with selfish and mean attitudes, of dishonest and corrupt leaders, of a hopelessness that invades almost everything, of the evil that is there "prowling around and looking for someone to devour" ...

Another feature of deep rural Ecuador. The canton has an indescribable natural beauty, virgin beaches and magnificent unexplored corners which contrast with the almost total absence of infrastructure to accommodate tourism. There is no drinking water on the island, nor drainage, and we see cars only on barges (which have been discontinued for 6 months now!). There is a pedestrian bridge that connects us to the “continent” - as people say - and that was built as a result of the humanitarian emergency brought about by the 2016 earthquake, which marked a before and after for Muisne.

The people are mulatto, rather than Afro, because we are very close to the neighboring province of Manabí, the people who came to populate and colonize these lands several decades ago and who merged with the native Afro-descendants. This resulted in a mestizo culture with very particular characteristics. People, for the most part, live from fishing and sale of survival products. There are no higher education centers, so young people who want to continue their education must migrate to nearby cities ... but that is really only for a  few ...

That is our today, defiant, challenging. The Covid19 also brought with it the miracle of the technique reaching houses made of reeds and dirt floors. Virtual education has required a true digital literacy campaign directed at teachers, students and parents (also, why not say it, at our Community!). We have had a beautiful experience of learning the virtual techniques together, holding hands and supporting each other at every step, discerning the answers, the small initiatives. I wake up every day wondering what our charism can contribute to the transformation of our environment, what new wine we can offer, what hope we should encourage, what gaps we can bridge. The Emmanuel was waiting for us here, and we learned a lot. I do not want to lose track of the Lord's constant winks in this very different and fragile reality, and now I can say that my previous years have prepared this kenosis that my heart desired and feared - all at the same time. I welcome as a true gift of Love to be able to understand a little better the mystery of the Incarnation from this reality and it is a privilege to experience the grace of a foundation. As Cora's poem above says, I feel called to touch the lives of those I come across, to be balm and a listener, tender and embracing. What a great mission!

It all started in August 2019. On the 13th I confirmed that Muisne would be the place where I would go through a rural health experience for a year. The Sisters opened their doors to me and I started packing. They told me that I would need boots, repellent, sunscreen, but I did not imagine that my heart would also have to be prepared.

Crossing the bridge, reaching the island, the welcoming hugs, were only the first palpable images of the face of God.

Because of the work, I had to go every day to a community called Bilsa, 30 minutes away from the island. But the experience would be more than just work. The Sisters taught me their prayer rhythm, so, every morning we prayed Lauds. I must confess, getting up earlier was quite a challenge.

Upon returning each afternoon, I had time for a few minutes of adoration. We prayed Vespers, went to Mass, had dinner and ended the day with Compline. On the weekends, I gladly joined the youth group. For a while we had guitar playing groups. Sundays were spent in community.

When I list the different activities, it seems unreal to me that they fit into three lines. And it is because all those moments are full of faces, of life.

Being a dentist in a place where you barely have access to water from the river, became an opportunity to serve from what you are, rather than from what you have. But with the certainty that I was not doing it in my name, I felt sent by a Community. I did not go alone, every day, the Lord appeared to me with a different face. Each family, each child, brought me the image of an Ecuadorian Nazareth. At home, when we shared mission experiences in the Community, it was to confirm that being Assumption has no limitations. Each one, from her/his vocation, has a role and a mission.

When the pandemic hit, the security created through habit collapsed. The Muisneño people, like the rest of the world, felt fear. They took refuge among the fields, but those who stayed walked the thin line between exposing themselves to support their family financially or to getting sick and embracing all that that implied. The frustration of not being able to do more in the face of a biological threat such as COVID, was the feeling and the underlying theme that marked - and continues to mark - the lives of so many doctors, nurses and dentists, who went from being comfortable in the consultation room, to running and changing our usual responsibilities for those needed depending on the situation.

I am increasingly amazed at how the Lord manifests Himself in these kinds of situations and solidarity did not take long in making its appearance. Young people caring for others, adults, creating networks so that no one lacks bread, encouraging each other.

Muisne is the enchanted island - that's what the Muisneños call it.  Today I don't doubt it. Its people, history and rituals have a charm beyond the obvious. It taught me that living fully is what makes joy not die out, that songs do not end and hope endures.

I am grateful to the Sisters, not only for opening the doors of their home to me, but also their hearts. Feeling welcomed in a foreign place is wonderful. But feeling at home is another story. Thank you, Assumption, for being that ray of light in the midst of so much. 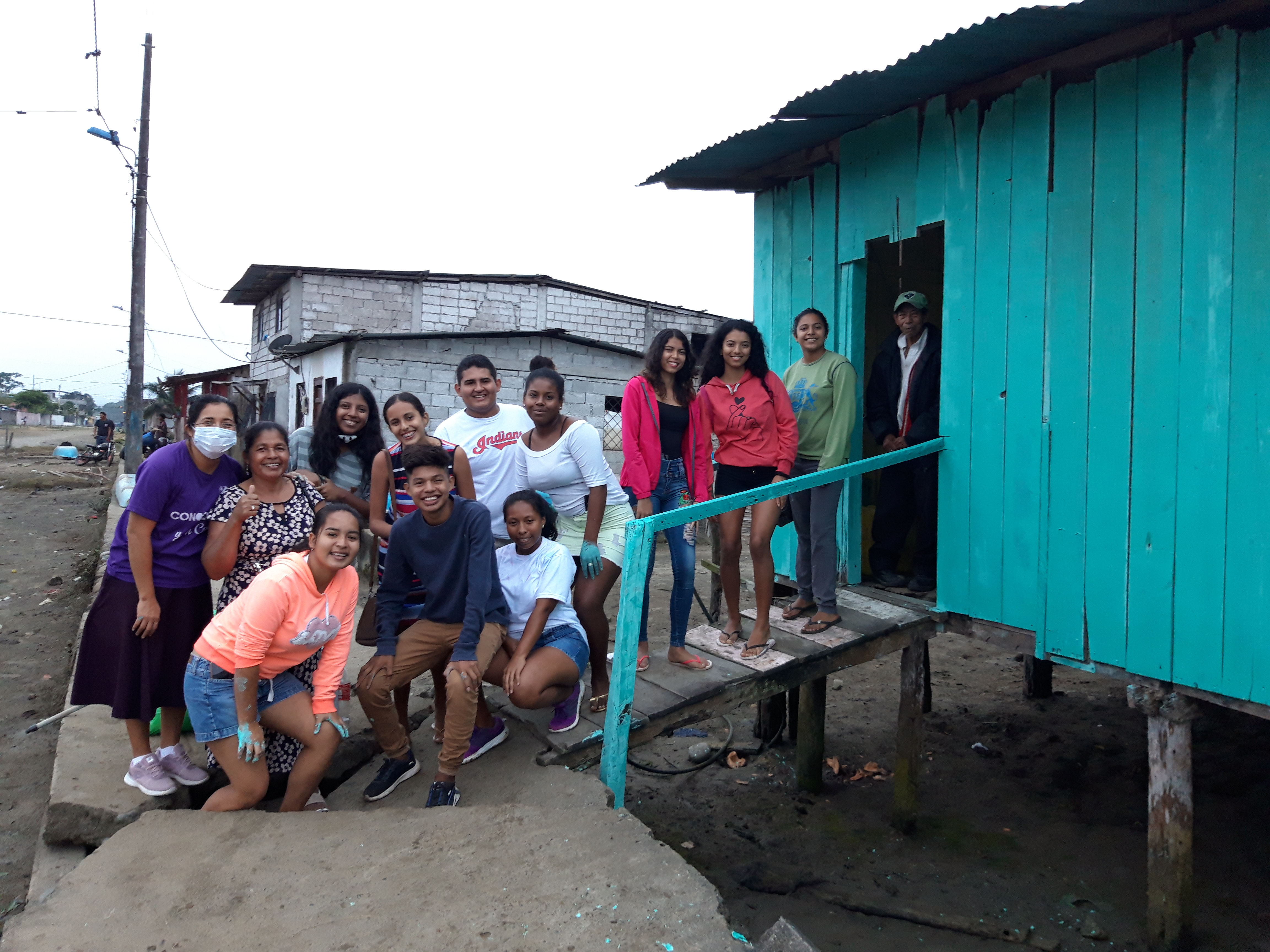 [1] We wanted to share this story of Muisne's foundation with a taste of Asunción Juntos. This has characterized our community from the beginning: welcoming this new reality seen and loved from these two vocations: RA and Lay Assumption