The Marie Eugenie Community Pantry – A Community Response to the Pandemic

During the pandemic, in a poor and highly populated area in Malibay, Pasay City, “We saw the reality of our neighborhood here in Malibay, more than the social distancing and the protocols, the priority  was to put  food on the table for the families.” In a place where the “no work, no pay” scheme is in effect, people go hungry.

Our plan to respond to what was happening came about when we saw an opportunity to help the organizers of the Malibay Community Pantry [i] last April 23, 2021. Initially, it was just to contribute goods, not necessarily to put up our own community pantry. The rise of community pantries all over the country also motivated us to seriously consider it – we saw it as a concrete “sign of our times” as our Mother Foundress, St. Marie Eugenie would say. It needed a response not only from us Assumption Sisters but from everyone who wants to see changes happen.

So as a community, we are six Sisters, a postulant, and a Novice on exposure, we brainstormed how to go about establishing the community pantry. We even looked back on our experiences last year during the peak of the Pandemic. It was a real struggle because we have in front of us an invisible enemy ready to strike anytime. We also had several donation drives at that time. Everything was pure grace as it became sustainable since donations would arrive regularly over 12 months.

After our meetings, we put everything into action. Since we have heard about community pantries being closed down due to lack of permits, we saw that the first action was to write a letter to our barangay about our intent of putting up a community pantry and also to ask for assistance as well. We’re blessed that our barangay officials are supportive of the plans and are even grateful for such an initiative – it gave us another motivational boost to go ahead. So everyone was hopeful. It was clear to us that it has to be a sort of partnership among us here in the neighborhood.

Each sister had an assigned task – from printing signages, and preparing the area for the pantry, to the one who will deal with the people so that proper protocols would be observed. Our donors came initially from friends who chipped in whatever they can. We were able to gather enough funds and in-kind donations for our pantry – sacks of rice, trays of eggs, face shields, and masks. These were our five loaves and two fish. And so we opened our doors to whoever wished to have a decent meal for that day.

Our first donor was Assumption College-San Lorenzo. They sent fresh vegetables, rice, and eggs. They seem meager, but to those who received them – it was a sort of “extension” for their survival. Another battle commences at the break of dawn.

Everything was a first for the Sisters. We were on our own. It was our first pantry display. It was our first attempt. It was both funny and frustrating. When the people saw us putting up signages on the gates, they started to flock, before we were able to open our gates, there was already a mob. We struggled to control the people. Everyone was seemingly desperate to get hold of anything they can have. Before we knew it, everything was gone. Our preparation was even longer than the actual distribution. Though lined-up and social distancing were tried, to no avail. We later on realized time and again, that the desire to get what is on the pantry table is more than the consciousness of having social distancing. But we did not lose hope – for, amidst the chaos, there was a glimmer of hope from that one elderly limping man. With all the busy people trying to scout and get what they can. There was a man in our midst who thought of GIVING BACK right there and there. After getting two eggplants, he asked one of our Sisters where he can put his share. We were struck. It was as if everything else stopped and what we only saw was the elderly man struggling to pull out his crumpled 20-peso bill and with a smile gave it to us. It was our “Aha!” moment! It felt like another Jesus experience for each of us. As if telling us, “Courage! It I! Do not be afraid!” From then on, there were many other “Jesus” who wanted to help and reach out. We continued to believe.

In the Assumption, the word “life-giving” is second nature. We are often asked, “how can we be life-giving in our decisions, in our actions, to others?” And so, we too asked ourselves. What is the most life-giving move to give our neighborhood a sustainable community pantry? Again, we sat down as a community a throw in ideas. After the first attempt, we re-grouped and planned and strategized, and put up signages. We also note the flow and the movements of the people. We decided to have exits and entrances. Another concrete example is, because we noticed, that people are already not wearing face shields when they line up, they only have face masks. So we decided to put up signage about face shields. It was a funny incident when, everybody was lining up this time, quietly and calmly, and waiting for the gate to be opened. But when the signages were put up, “Dapat may facemask and shield,” and they saw it, they all gave a sigh and suddenly dispersed going home to get their face shields. Coming back, they were already properly geared.

We then realized, that these protocols still need to be put in their consciousness and that the virus is still here with us, but again we go back to the roots - because of hunger and the desire to put food at the table every meal time is of more importance. Then it dawned on us that we are seeing another kind of “front liners” here in our midst.

Another strategic decision we made was to put the pantry inside the compound (we used to put it in front of the gate). Now we are occupying the playground, and we noticed the shift from a restless and “garapal attitude” into a calmer and serene environment. Since they can enter by batch enough for social distancing, it brought them to consciousness that there is enough for everyone, and maybe because of the presence of the Sisters also. But we believe it is more of making them feel assured: “na hindi sila mauubusan.”

We have barely begun but we have been experiencing and witnessing a modern-day version of the “miracle of feeding the five thousand.” Ang kagandahang-loob ng Diyos kailanma’y hindi natin masusukat, patuloy itong dumarating. From our very own Old Girls, friends of the Assumption, private companies, lay partners, students, faculty and staff, and parents from our Assumption Schools this is a miracle happening right in front of our very eyes.

We even invited our Novitiate Community to help in our packing. Our SJNS faculty and staff volunteered their time and resources as well. We see here that this is never an effort of a few individuals – not only sisters – it was a collaboration of everyone. It was a community affair. Everyone pitched in with what they had and what they can. We are mere channels, bridges of help and hope. “Nanatili at mananatili kaming tulay ng buhay ditto sa malibay.”

But what we see now as a game-changer is the movement toward bringing into the full consciousness of each of our neighbors that idea of “giving back” whatever they can so that they too can be our partners in sustaining our community pantry. Those who have received gave more, they sent dried fish, veggies, packs of bread, and monetary donations from five pesos to a hundred pesos. Everything is grateful counted. It may not be as much as our other donors but it speaks of the idea of paying it forward from the very people who have received blessings.

Today, we do not only receive from outside donors, but we have also been receiving from those who benefit from our community pantry. It is by empowering them and making them in this community that we can efficiently and life-giving sustain what we have now. There are many stories on the grounds. But the stories of hope and positivity that we have heard allow us to believe that we are on our way to transforming our neighborhood.

At the Service of Life…

St. Marie Eugenie has always believed in the goodness of each person, only if take a closer look at each person we would met. Now, we are tapping local vendors, for an instance, the magtataho (soya vendor) who would always pass by. He too is somehow assured of having an income for that day and assured of putting food at the table when he gets home after a day’s work. This very same magtataho, would happily serve and help in our pantry and give taho to everyone lined up. We too put up a small pantry for our motorcycle delivery drivers, our garbage collectors, and pedicab drivers - they are the ones most often forgotten and they are the ones who serve us the most.

Our Marie Eugenie Community Pantry donations are still coming in… calls are non-stopped, deliveries are outpouring, people are still asking how they can be of help, and becoming the “tulay” for this overflow of generosity is but our humble gift to keep St. Marie Eugenie’s legacy of constantly transforming society through faith and action. We still have a long and dark road ahead but we see the glitters of hope shining. And yes, as our foundress would say, “across this darkness, we salute the dawn!”

[i] A Community Pantry operates on this principle “Give what you can, take only what you need.” It basically stems from the bayanihan spirit: An aspect of Filipino culture wherein members of a community unite to help one another, without expecting anything in return. The First Community Pantry in the Philippines was opened sometime in April 2021 in Maginhawa Street, Quezon City. 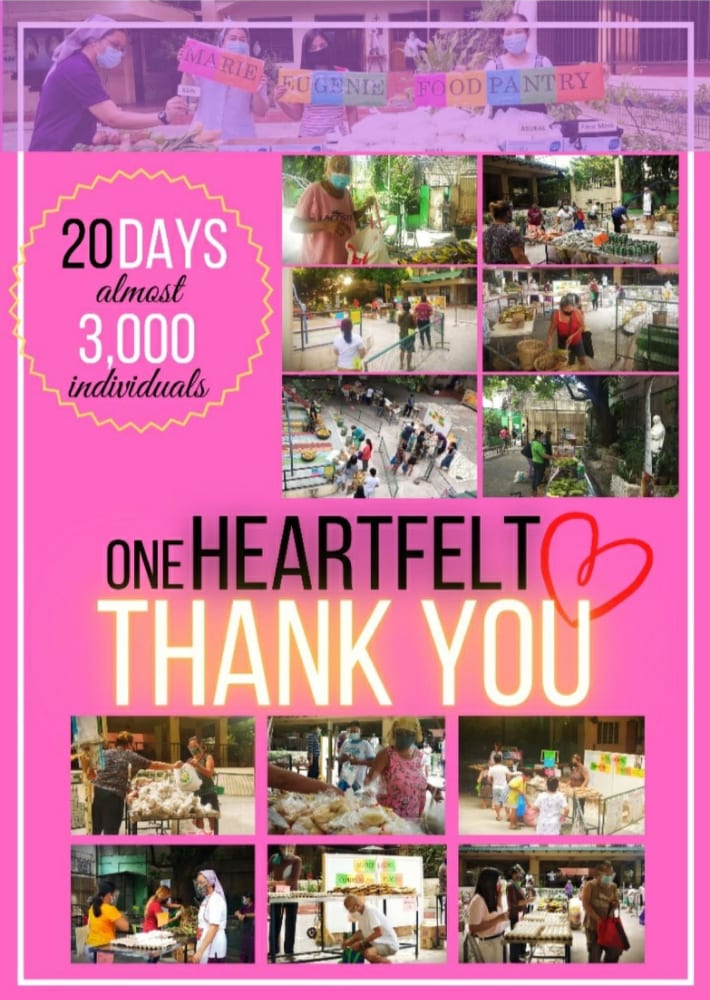